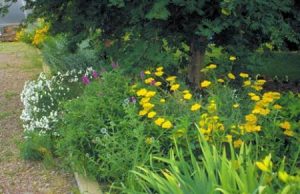 Xeriscaping (above) is not synonymous with zeroscaping (left below).

After dry years and low water tables, the word “xeriscape” is becoming a new buzzword. Many assume that it means growing only cactus and yuccas and covering the soil with gravel. Nothing could be further from the truth. Lauren Springer, in her book The Undaunted Garden refers to her xeriscape as a “lush, dry garden.” One needs only to learn which plants can be classed as xerophytic they require less water or have better methods of obtaining water, (i.e. a long taproot system) or retaining it (i.e. waxy leaves that retard transpiration). Neither does xeriscaping mean never again being able to grow water guzzlers such as Astilbe or Ligularia. It is simply a matter or organization grouping plants together according to the water requirements. 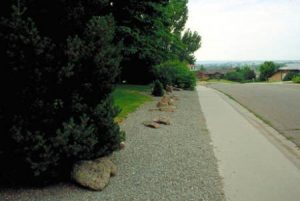 Xeriscaping has become a way of life in areas where water is scarce. In Colorado, it is suggested that homeowners leave a buffer zone between their lawns and the street so that run-off water from lawn sprinklers does not run down the gutters. In some cases, this is simply a mulched area planted with low growing junipers punctuated with large rocks, or it may be a flower garden that needs only the lawn’s excess water. Gardeners with allotment plots are restricted to irrigating only with watering cans. When it is necessary to carry water, not a drop is wasted. Since the 1995 drought in England with its severe water restrictions, the signage “drought tolerant” is seen at all British nurseries. Beth Chatto’s garden in Essex, the driest part of England, is an inspiration to many. Her book, The Dry Garden, was invaluable when I first tackled gardening on two acres of sand.

In Europe, the formerly pristine lawns at Versailles, Vaux-le-Vicomote and Tuilleries Gardens are now low growing flowery meadows. City parks in Germany feature low-maintenance perennial and annual plantings that never need watering. The Weihstephan Trial Gardens and the writings of Hansen and Stahl Plants and their Garden Habitats contain extensive plant lists for every situation.

Gardeners are often unwilling to accept the fact that during summer months, they waste water at a very serious rate. It was to educate consumers concerning water-wise gardening practices that Durham Region decided to develop a demonstration Water Efficient Garden adjacent to the regional headquarters in Whitby, Ont. The construction began in autumn 1997, and the trees, shrubs and roses were planted in November. Perennials, annuals and bulbs were added in 1998. The large trees were given weekly soakings through the summer of 1998, but other plantings were watered only until the end of June, 1998. The only maintenance duties required during the 1999 season were early spring clean-up, regular deadheading and occasional weeding (much reduced by the use of mulches). The beauty of this garden, watered only by Mother Nature during the dry 1999, has amazed its many visitors. 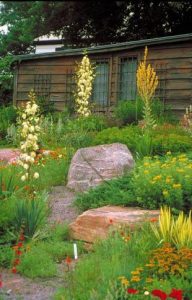 The author’s rock garden has never been watered by anyone other than Mother Nature in the past eight years.

There are several other reasons to consider xeriscaping besides the environmentally correct desire to conserve water. You may have purchased property with sandy soil, have steep slopes, a garden that you visit only on weekends, find the cost of irrigation equipment and water prohibitive or simply hate hauling hoses around.

Following are some basic steps in creating a beautiful xeriscape:

Limit the manicured lawn to a flat, easily irrigated shape (no long, narrow strips of grass). Convert large grass areas to natural meadows with mown pathways. Plant slopes with xerophytic plants or terrace them for better water retention. Group plants according to their moisture requirements with the garden needing moisture being located near the water source.

Improve the soil with organic matter to improve retention and increase fertility.

Select drought-tolerant plants. Good indicators are native or naturalized species from dry habitats, plants that have fuzzy, waxy or silver, aromatic or finely divided foliage or plants that are dormant during summer’s heat.

Planting techniques are important — dig a hole, fill it with water and allow it to be absorbed into the soil. Then open the soil ball spreading the roots so they will quickly grow into the surrounding area. Firm in well and water again. Water regularly until established, gradually reducing the frequency. The ideal time for installing a xeriscape is late summer to early autumn, which allows for maximum root development before the drought of next summer.

Water turf and garden areas no more often than once per week but apply at least two inches of water at a time. This forces the plants to develop extensive root systems. Drip irrigation cuts down on the amount of water lost to evaporation by sprinkler systems. Harvest the water from your roof in rain barrels. One-quarter inch of rainfall on a 1,000-sq. ft. roof provides 150 gallons of water. Learn to measure weekly rainfalls and irrigate only when necessary.

Mulching bare soil to a depth of two to four inches prevents water evaporation, maintains an even, cool soil temperature and prevents the germination of weed seeds. For ornamental gardens, choose a mulch that is as natural in appearance as possible and that will eventually break down and become soil. The best time to apply mulch is in late spring after the soil has warmed, but before summer’s heat begins. A late autumn mulching helps avoid the alternate freezing and thawing of soil.

It is difficult to maintain a landscape according to xeriscape techniques if the initial design and plant choice is faulty. Therefore, it is essential that all landscape architects and garden designers understand the principals of xeriscaping.

In a perfect xeriscape world, the busiest months for landscaping crews would be mid-August to mid-October, and boulevard plantings would never be grass!

Marjorie Mason is the owner of Mason House Gardens, a retail garden centre located east of Toronto and the author of the much-acclaimed Amazing Annuals, published in 1999 by Firefly Books.

The Importance of Design and Materials
March 7, 2018