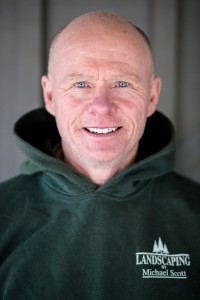 As a Horticultural Landscape Technician and Certified Horticultural Technician, Mike’s career began as a young man working alongside his father and brother at the family’s Scott’s Garden Centre. It is there that he developed a passion for landscape design, construction, and the outdoors.

His passion led him to obtaining a diploma in the H.L.T. Program at Humber College in 1984 and in 2002 he earned his C.H.T. from Landscape Ontario.

Upon completing his diploma, Mike established Michael Scott’s Landscaping & Design in 1990. Since the early days, consisting of only a two man crew, Mike has been able to develop this company through his professionalism, leadership and extensive experience.

Mike has also gained life experiences through natural horsemanship training, as a ski instructor at Horseshoe Resort, where he met his wife Allison, and as an Active Member of Landscape Ontario for over twenty years.

Although these days Mike spends most of his time in the office: designing, estimating, and managing projects, his interests include horseback riding, hockey, skiing, and spending as much time as he can in the great outdoors.